Whose stories are you collecting?

A community can be any group of people that share something in common. A participatory archiving event will concentrate on documenting a specific group of people, whether it be a group who share a location, an interest, or an experience. Communities are complicated and there often differences among group members as well as commonalities. It is essential for the Project Team to consider the diversity—and tensions—within a specific community to ensure that its full richness is reflected at the event and in the collection.

For an overview of all RoPA Roles and Responsibilities, please review the Building a Team module.

Depending on the size of your Project Team, you may need to designate 1 to 3 people from the Community Working Group to assist the Community Coordinator in distributing, compiling, and analyzing the Defining Community Questionnaire. These working group members may also assist in creating, implementing, and analyzing a post-event survey of participants.

Members of the community are vital to the process of defining that community. These representatives on the Project Team should drive the conversation and help the library set clear expectations around who will be engaged. They will also be familiar faces welcoming the community on the day of the event.

Everyone on the Project Team can leverage their networks and help brainstorm members of the community that should be invited to the event.

Download a Quick Checklist of the Defining Community steps here.

Before the Event
At the
Event
After the Event

Do you know of a project or program that could be featured here? Please contact us. 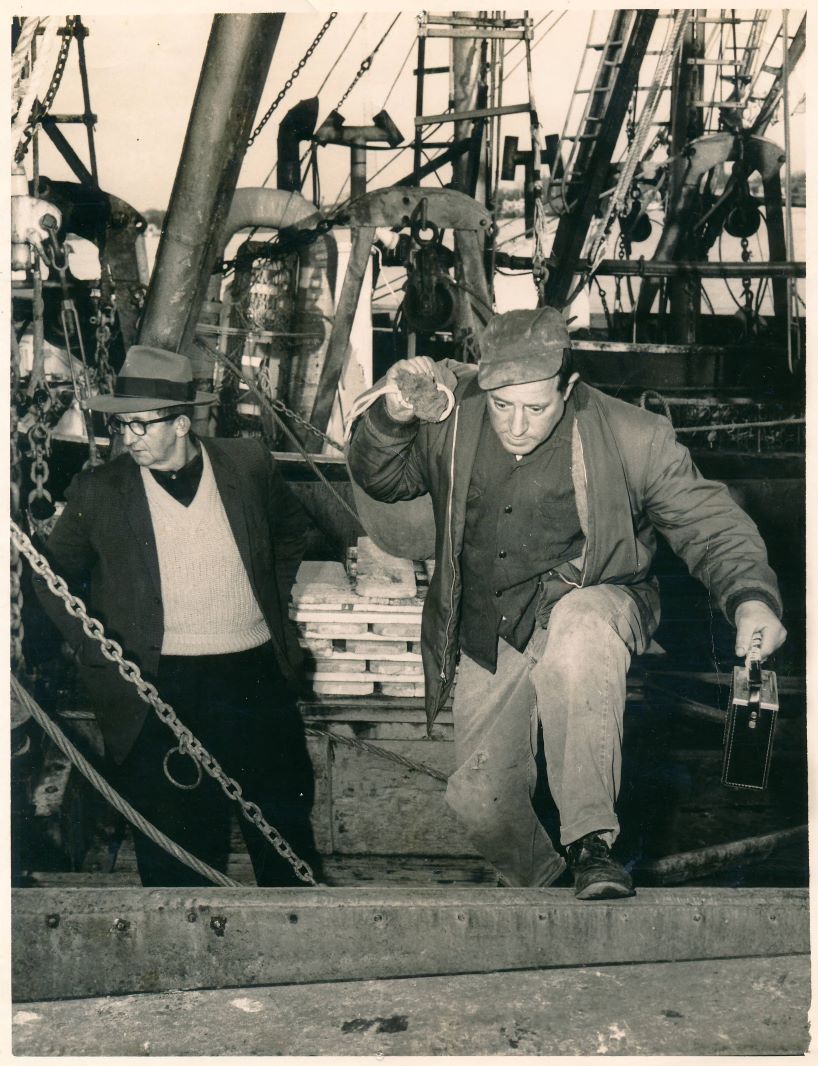 Manuel F. Sylvia (right) arriving at State Pier in New Bedford after being lost at sea.
Using a Variety of Lenses

While several cultural institutions in New Bedford, Massachusetts, are devoted to preserving and interpreting the city’s proud whaling roots, the New Bedford Fishing Heritage Center (NBFHC) was established in 2013 to do the same for the city’s contemporary fishing industry. Having already collected many oral histories, in 2016 NBFHC planned a scanning day to collect photos to be included in exhibits featuring multigenerational stories of fishing families.

To define the fishing community, the NBFHC took a broad approach in its proposal for a Common Heritage Grant from the National Endowment for the Humanities. “The [fishing] industry has long been dominated by independent, family-owned and operated fishing boats, and shore-side support businesses,” the organization’s director explained. By including support businesses, NBFHC signaled that the event welcomed anyone with a connection to New Bedford fisheries, not only fisherman and fisherwomen at sea. By NBFHC’s estimate, about “4,400 men and women work in the industry, in specialty trades that range from fishermen and boat owners to fish cutters and gear manufacturers.” The definition of the community also included the diverse types of fisheries in New Bedford, such as scalloping, lobstering, and groundfishing. The NBFHC further specified the ethnic diversity of the fishing industry: “Portuguese (both mainland and Azorean), Norwegian, Yankee, Canadian (predominantly from Nova Scotia and Newfoundland), Irish, Polish, and more recently, Vietnamese, Mexican, and Central American (predominantly Guatemalan) heritage.” By using a variety of lenses to view differences within the fishing community, the NBFHC team was able to welcome all members of the commercial fishing industry on its scanning event day. 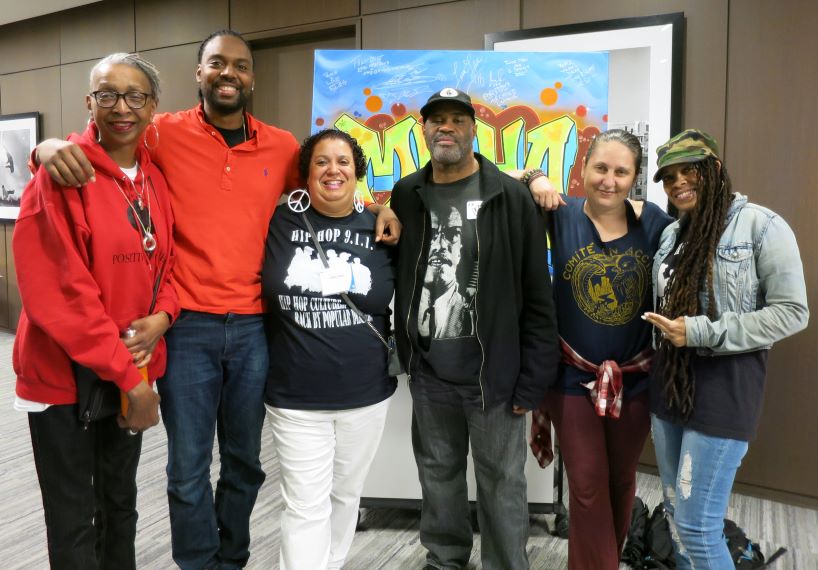 Cindy Diggs (3rd from left) with volunteers at the “Show ‘Em Whatcha Got” Mass. Memories Road Show.
Getting Paid Assistance from a Community Leader

In 2018 UMass Boston and the Boston Public Library (BPL) was awarded a National Endowment for the Humanities Common Heritage grant to document the emergence and growth of hip-hop culture in the greater Boston area. The two institutions had recently partnered to launch the Massachusetts Hip-Hop Archive and sought to continue to develop a relationship with hip-hop community members from the Boston area as well as enhance the new collection. A participatory archiving event seemed like an ideal chance to engage and collect.

Using the grant funding, UMass Boston and the BPL hired Cindy Diggs, a peace activist and community organizer, to serve as outreach coordinator for the event, “Show ‘Em Whatcha Got” Mass. Memories Road Show: The Hip-Hop Edition. Diggs is a leader in Boston’s hip-hop scene and has many personal connections to the diverse sub-groups within the community: women and men, young and old, performers and artists from the 1980s and beyond as well as producers, social and racial justice activists, and educators. UMass Boston and the BPL relied on Diggs’s relationships to help identify community members connected to all four elements of hip-hop culture: dance, DJs, rap, and graffiti. As the community lacked a formal organizational structure, Diggs held several open, public meetings where she invited everyone to help build a list of potential contributors and volunteers for the event.

While the Community Tool Box from the University of Kansas is geared toward public health, its “Understanding and Describing the Community” section is relevant for participatory archiving events. The page helps Project Team members think about their community in different ways and offers tips for how to reach out to all community members.

The Inclusive Historian’s Handbook includes an entry on Civic Engagement, described as a means to “challenge exclusive pasts and promote a more just and inclusive future.” There also is an entry on Collaborative Practice that outlines key components of a successful community engagement, including deliberate and ongoing methodologies for reflective practice.

US Department of Health and Human Services: The Principles of Community Engagement

The Principles of Community Engagement, available in English and Spanish, from the U.S. Department of Health and Human services is a comprehensive guide to engaging partners in community work. Chapter one provides clear definitions of key concepts in community engagement, while chapter four outlines four practices for successful engagements: know the community, establish strategies, build networks, and mobilize communities.

A group of people with diverse characteristics who are linked by social ties, share common perspectives, and engage in joint action in geographical locations or settings.  (From the National Center for Biotechnology Information, U.S. National Library of Medicine What Is Community? An Evidence-Based Definition for Participatory Public Health.)

A process designed to expand and strengthen ties among community residents and to link them to supportive individuals, organizations, and resources to build social capital and address problems through development of partnerships and policies that promote community participation. A community engages in collective action with professionals for problem solving and enrichment resulting in new or strengthened social networks, capacities for group action and support, and standards and expectations for the life of the community. (Adapted from the Aspen Institute Final Report Contributions of Community Building to Achieving Improved Public Health Outcomes.)

The process of cultivating a two-way relationship with and through groups of people affiliated by geographic proximity, special interest, or similar situations to address issues affecting the wellbeing of those people. Community engagement can take many forms: mobilizing resources and influencing systems, changing relationships among partners, and serving as catalysts for changing policies, programs, and practices. Partners can include organized groups, agencies, institutions, or individuals.  (Adapted from the US Department of Health & Human Services and the Indiana Arts Commission.)